Barry Parker was born in 1942 in Cass City, Michigan. 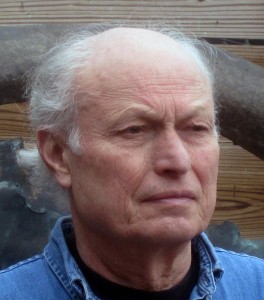 He received his undergraduate degree in 1964 from Eastern Michigan University and earned his MFA degree in sculpture from The University of Massachusetts in 1967.

Upon graduation Mr. Parker taught at St. Cloud State College in Minnesota and at Edinboro State University in western Pennsylvania before moving to Philadelphia in 1980.  He has been Professor of Sculpture at the University of the Arts from 1980 until 2012.

Mr. Parker has exhibited extensively both nationally and internationally with solo exhibitions at the Kouros Gallery in New York, the Ratz Gallery and the VA Design Matteus Gallery in Budapest, Hungary, and more recently, the Michener Museum in Doylestown, Pennsylvania and the Rack and Hammer Gallery in New York.  His work is in collections and on public display here in the United States as well as in Asia and Europe.

Besides having a distinguished career as an artist and educator Mr. Parker spends considerable time working with non-profit arts organizations.  He has served as President of the Sculptors Guild in New York and was a founding member of Philadelphia Sculptors.  He was a member of the Board of the International Sculpture Center for 10 years and for 12 years served as a Board member for the Art Committee of the RDA in Philadelphia, helping select public sculpture for that city.  Mr. Parker has been a 6 time visiting artist to the Vermont Studio Center and is a contributing writer to Sculpture Magazine.  Mr Parker was as Eisenhower Exchange Fellow to Hungary in 1996.  He continues to work to promote cultural exchange between artists in Hungary and the United States through exhibitions and visiting artist programs.